Tragedy strucks in Anambra Community when a 40 feet container fell off its trailer claiming the lives of two tricycle operators, 35-year-old Sunday Agbafor and 39-year-old Adidu Uchenna as well as one Mr Chika who is the conductor of the truck.

The accident happened around 9:20 am at Mercedes Avenue, Nkpor in Idemili North LGA of Anambra State on Sunday.

According to the Public Relations Officer, Anambra State police command, SP Haruna Mohammed, disclosed this to newsmen in a statement released in Awka.

He said “A Mack trailer conveying a container with registration number XS 254 ENU, driven by one Amuche Chinedu ‘M’ of Ugwunagbo LGA of Abia State lost control and knocked down two tricycles with registration numbers AAH 774 UW and AWK 191 QN ridden by one Sunday Agbafor ‘M’ aged 35yrs of Onuofia Igboeze in Onicha LGA of Ebonyi State and one Adidu Uchenna ‘M’ aged 39yrs of Ugwunagbo LGA of Abia State.

“As a result, the trailer with the container fell into a deep erosion pit while the tricyclists together with the conductor of the truck one Chika surname and address unknown died on the spot. 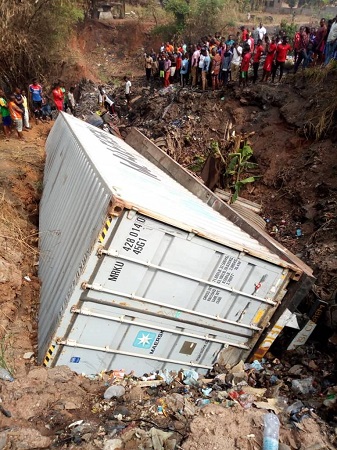 He said the remains of the deceased have been removed and deposited at Iyienu Hospital Morgue, Ogidi.

The police team also cleared obstruction created by the accident to enable free flow of traffic in the area.

Meanwhile, the truck driver who sustained injuries is currently receiving treatment at the hospital.

He said the Commissioner of Police, CP John Abang, while commiserating with the bereaved families ordered a discreet investigation to ascertain circumstances surrounding the incident.

Davido Finally Reunites With Chioma After The Birth Of Their Son...

God is Great: Nigerian Pastor And Wife Welcome A Set Of...

“I Cry Whenever My Husband Sleeps With Me” – Regina Daniels

Man beats wife to coma for sleeping with another man on...